The Story Behind the Inflatable Tiki Bar

Back in 2014 I decided I wanted an inflatable Tiki bar for my rental inventory. I love going on tropical vacations during our off-seasons, and I wanted to recreate the feeling of the beachside Tiki bar in inflatable form. But the only one I could find was this sad thing:

Not to hurt anyone’s feelings, but I don’t think the designer of this inflatable understands the essence of Tiki bars. In no way does it give off the tropical vibe I was looking for.

So I decided to have one made. After a few phone calls I found a U.S.-based custom inflatable manufacturer who was excited about the project. There was quite a bit of back and forth on the design to get it right. I presented an initial napkin drawing of my concept. The manufacturer converted that drawing into a digital mock-up in a form that would work as an inflatable structure. A lot of thought went into the final design. I’m sure the designer thought I was a pain in the butt throughout this process, but I wanted to get it right. This was the end result:

My plan was to sell inflatable Tiki bars to other party rental businesses (since there were no good ones on the market), but there were two problems. 1) My Tiki bar was not renting that frequently. I started to have doubts about whether the average rental customer thought this was as cool as I did. And, 2) the U.S. manufacturer’s price for additonal units was too high. I thought the price per unit after the prototype would go way down now that all the design work was done, but it did not. In hindsight, I think this manufacturer was more interested in producing one-of-a-kind inflatable structures. They were not into mass producing the same unit over and over.

I chalked problem number one up to my customers just not understanding what an inflatable Tiki bar was all about. They didn’t get the concept. Some asked if they could jump in it. “Sure, if you like jumping up and down on the ground. It doesn’t have a floor”, I would tell them. Clearly, it would take some time for the world to comprehend the awesomeness of this creation.

To solve problem number two, I contracted with a manufacturer in China to have a similar unit made with some minor improvements. The price was about one-third of what the U.S. manufacturer was charging, including shipping to a port in Florida. Now that I could work with. I would have loved to have stuck with the U.S. manufacturer, but no one was going to pay $6,000 for an inflatable tiki bar.

I wanted to get a prototype from China and put it in my inventory to make sure the quality was up to standards. From all accounts it was (and still is), but I never saw the prototye in person. It was sold to a golf club in Florida while still on its way to the U.S. The golf club uses it as a portable bar for special events and tournaments.

At about this same time, I decided that I was going to start development work on my software product, Bounce Rental Solutions. This relegagted the idea of selling inflatable tiki bars permanently to the back burner. The lead times with manufacturing in China were going to be a little problematic. Certainly doable, but not something I wanted to deal with at the time for various reasons.

In the four years that have passed since, the one inflatable tiki bar in my rental inventory has slowly, but surely started renting more often. It has a high rate of repeat customers, so they must like it. Once they have it at their party, they can’t do without it. I’ve attended a couple of events at which the inflatable Tiki bar was setup, and I must say, you really do get the feeling you are somewhere else. Somewhere better.

If you Google “inflatable tiki bar” now you will still see that original, ugly Tiki bar, but you will see many more images of  my design now. There are a few other inflatable Tiki bars on the market now. Some good, some bad. One of them appears to be my exact design and looks to be made by the same Chinese manufacturer. That’s fine with me. I’m happy to see the concept catching on.

Even though my inflatable Tiki bar was not the first on the market, it was the first one that didn’t look like crap. I consider it my small contribution to the industry. In fact, I have some great ideas for the next generation of inflatable tiki bars, but someone else is going to have to carry the (Tiki) torch.

Things You Should Buy on Amazon (Part I) 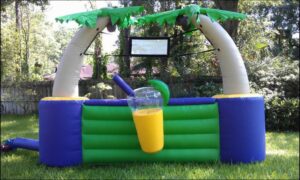 The Story Behind the Inflatable Tiki Bar 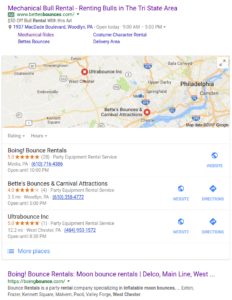 Why Your Google My Business Page is so Important

Looking for a New Software?

Don't Take Our Word For It!

We have used other bounce rental software and by far Bounce Rental Solutions is the most user friendly! I would highly recommend BRS to anyone starting an inflatable rental business or anyone looking for an easy to use online rental software.

Michelle Bitzberger Owner, Boomers Bounces
Very user friendly. Very intuitive. It got everything that I need from orders tracking to reports. Easy integration with payment gateways. The calendar heads up view is the best one I've found!

Mark PowellOwner, Southern Bouncers
Setting this thing up is extremely simple and intuitive. Customer service is unmatched and is willing to listen to and responsive to suggestions. Look no further, this is the one you want!